On 17 March the European Commission proposed a “Regulation on a framework for the issuance, verification and acceptance of interoperable certificates on vaccination, testing and recovery to facilitate free movement during the COVID-19 pandemic”. The Member States already adopted a common position on the proposal, which aims at introducing a
Digital Green Certificate. Now that the Member States’ representatives in the eHealth Network agreed on guidelines for the technical implementation of the system, the roll-out of the certificate seems to be within arm’s reach. The swiftness will most likely depend on the ability of the European co-legislators to agree on the final text.

The European Chambers of Commerce and Industry stressed on several occasions since the start of the pandemic how important it is that the Single Market keeps functioning as well as possible to the benefit of citizens and businesses. It is also in this spirit that we supported a common European approach put forward in the different Council Recommendations on the temporary restriction on non-essential travel within the EU and the possible lifting of such restrictions. In the same manner, we actively and strongly support the introduction of the Digital Green Certificate which should lift the barriers that were imposed at the internal
borders of the Single Market for more than a year. In this sense, we urge the European Institutions for a swift adoption of the Regulation and timely implementation of the Certificate.

The time has come for all EU countries to act in unison. We do not call into question Member States’ competence in terms of public health and safety, including possibly imposing exceptions on European residents’ fundamental right to free movement within the borders of the European Union. But too many countries simply brushed off the European Commission’s warnings concerning travel restrictions. Restrictions to travelling can only be legitimate when they are non-discriminatory and proportionate. The text put to vote in the European Parliament should reflect exactly this.

For the Digital Green Certificate to be a success, EUROCHAMBRES believes that five fundamental principles need to be followed:
1. There should be no discrimination between EU citizens and the free movement of people needs to be strengthened; EU citizens are therefore to be treated in the same way, irrespective of whether they are travelling to their country of residence or not;
2. All vaccines considered safe and effective should be covered by the Certificate and mutual recognition should apply. Every new scientific evidence should of course be used in further implementing acts and adjustments can be made in this respect;
3. All efforts to have this system recognized worldwide should be pursued. In parallel, countries in the immediate neighbourhood of the EU such as Northern Ireland and Western Balkan countries should be integrated in the system.
4. Minimum common standards for tests in order to avoid further restrictions are encouraged.
5. Developing a digitally enhanced International Certificate of Vaccination should be harmonised among WHO and EU as well as efforts to have this system recognized worldwide should be pursued. We trust the European Parliament will take into account these considerations and will adopt an approach that will be most beneficial to all Europeans 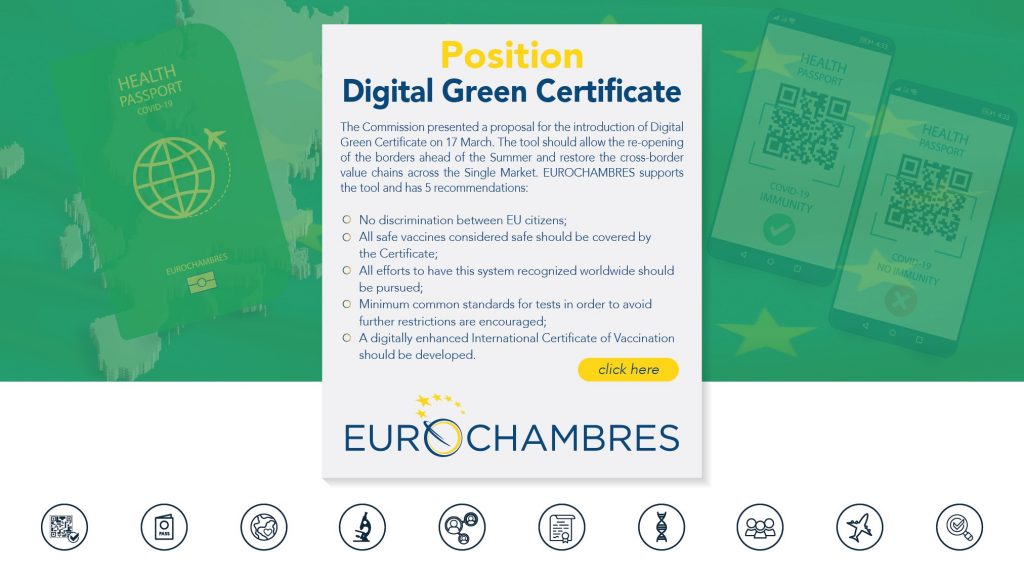